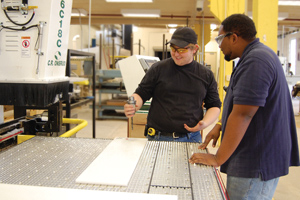 South Boston is becoming a training ground for advanced manufacturing.

Several facilities in the Halifax County town will be a part of the Manufacturing Skills Institute (MSI), an initiative sponsored by the Virginia Manufacturers Association and ECPI University.

“I think we all should be very proud of this initiative that’s being put forth here today and that we’re being considered as a destination site. It’s very important. It’s very key,” Douglas Corrigan, executive director of the Riverstone Energy Center in South Boston, said at a MSI announcement ceremony in December.

Riverstone’s Modeling & Simulation Center of Excellence and its National Center for Coatings Application, Research and Education (C-CARE) are education partners in MSI as is the Southern Virginia Higher Education Center in South Boston.  Other educational and industry partners will be added as the program expands.

Vassey says the industry is trying to reintroduce young people to manufacturing’s new image. In the past 25 years, manufacturing has changed from a labor-intensive to a technology-driven industry, a development that requires employees with highly developed skills, he says.

“At the end of the day …it’s a wonderful environment for folks who can get the skills because it’s great pay,” Vassey says.

MSI, which doesn’t have a brick-and-mortar home, will provide advanced manufacturing education and training programs, with each partnering institution contributing to a piece of the pie. Paul Dockery, business development specialist for ECPI University, says the institute “is not going to sit in South Boston, because it’s portable, but that will be one of the locations you can obtain a lot of the training.”

Kevin Paveglio, president of ECPI University’s Virginia Beach campus, says he hopes MSI eventually will train existing manufacturing employees as well as students trying to enter the industry. Training could take place at any of MSI’s education partners or at a manufacturing site.

When thinking of partners for the initiative, Dockery says that the well-equipped Southern Virginia Higher Education Center was one of the first organizations that came to mind. SVHEC’s Innovation Center, for example, has an advanced machining center and a multi-use classroom.

ECPI will offer select advanced manufacturing skills certificates, which can be used for college credit. The cost of the training programs will be based on aspects such as class size and location.

The Virginia Manufacturers Association says the commonwealth has more than 5,000 manufacturers employing more than 230,000 workers.

MSI in the Press